MARPE / SME as a non-Invasive alternative to SARPE in Houston

In this article, you will learn how Dr. Kanaan is correcting severe narrow maxilla utilizing his invented expander with mini implants TADs.

To make crooked teeth straight and correct crossbites, an expansion might be needed during orthodontic treatment to create enough space and accommodate the crooked teeth. This is usually carried with a traditional orthodontic expander called the Rapid Palatal Expander RPE.

However, in extremely narrow cases with deficiency more than 5 mm "like Fig. 1” or in older patients, the traditional RPE might not work for the upper jaw, and a more aggressive approach might be needed to open the mid palatal suture.

What are the other treatment options if the traditional RPE is not indicated?

Surgically Assisted Rapid Palatal Expansion SARPE was introduced by Dr. Brown in 1938. He suggested to split the center of the palatal bone surgically and following the surgery with the use of the traditional RPE to expand the maxilla. This split will minimize the resistance of expansion from the bone especially in adult cases or cases with more than 5 mm of deficiency.

Although SARPE has higher stability than traditional RPE, its use is not widely considered due to the surgical cost and the recovery time. In Houston, SARPE will cost between $8000 and $12000.

In 2014, Dr. Moon modified the traditional palatal expansion appliance to support 4 mini implants. This modification allowed the RPE to be attached directly to the bone thus transferring the expansion forces directly to the skeletal bone. He named his device Surgical Maxillary Expander SME. Sometimes, this concept is also referred to as Miniscrew-Assisted Rapid Palatal Expansion technique (MARPE) or Maxillary Skeletal Expander MSE. 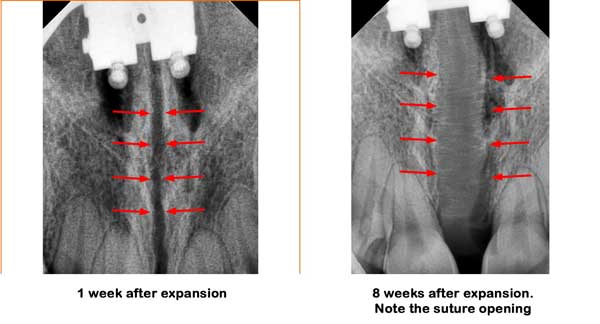 His expander comes in two sizes: 7 mm and 9 mm. However, in extremely narrow cases, Dr. Kanaan will custom make a surgical expander to fit the patient mouth.  A cone-beam computed tomography might need to measure the exact width of the maxilla.

If you have any of the above problems, or if you were told that SARPE is the only option to correct your case, please call the office of Dr. Kanaan at 281-249-9999  for a FREE consult.

What are the benefits of using SME / MARPE over SARPE?

What are the risks of SME?

What are the benefits of using mini-implants with the expander?

At what age is the MARPE appliance recommended?

Research has shown that the maxillary suture will respond less to expansion forces from the RPE after the age of 13 (REF).   As the suture gets tighter in young adults, it becomes harder to achieve bone expansion and most of the expansion coming from the traditional RPE is dental expansion.

The addition of 4 mini implants will add great support to the RPE allowing more skeletal effect and better expansion of the Maxilla.

There is no age limit when SME is contraindicated. We need to try and sometimes, a Corticotomy might be indicated. Dr. Kanaan has successfully corrected a severe narrow maxilla in a patient at the age of 36 utilizing two sets of SME expanders. 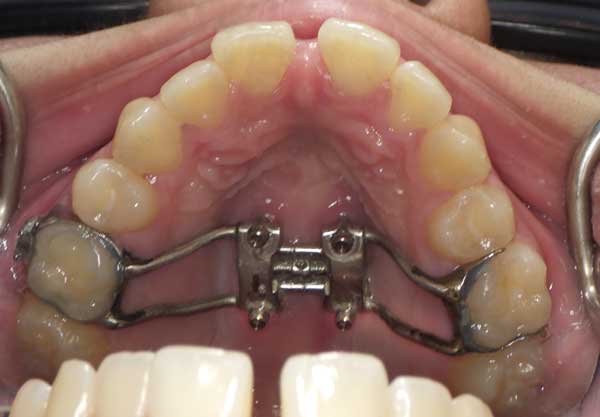 Can MARPE be used with Invisalign?

How often do I need to turn the expander with the MARPE?

JSON-LD TEXT
Gallery
Case 4. This patient had braces before and the bite was not corrected. Dr. Kanaan made 2x MARPE appliances for him. Excellent outcome
❮ ❯